Importing subscribers with a CSV file

This article refers to MailPoet 2

If you're looking for MailPoet 3 articles, please go to MailPoet 3 Knowledge Base

A Comma-separated values, or CSV, is the standard file for importing and exporting contacts. Gmail, Apple Mail, Outlook and all the other email software uses this format.

Notepad on Windows or TextEdit on Mac handle these files. Lists in Excel files can be saved as a CSV.

Imported subscribers are automatically "confirmed": they won't get an email asking them to confirm their subscription. Consider yourself a spammer if these people never asked to be on your list. Read more.

Here's an example of what a simple CSV file looks like:

The first line with "Email" and "Name" shows the required column headers. Without those, MailPoet won't be able to import.

The following won't work because of the missing Email and Name on the first line:

MailPoet will try to match the columns when importing. Using the above CSV example, this is what the MailPoet importer proposes for column matches:

MailPoet may not import all data from multi column CSV files. Columns will be shown in the importer, but it may ignore them in some cases. For example, a MailChimp CSV will have quite a few columns ignored by MailPoet:

MailPoet now supports Custom Fields for your subscribers, so you can use them to personalize your newsletters. When you are importing your subscriber list, just make sure you select these other columns as custom fields: 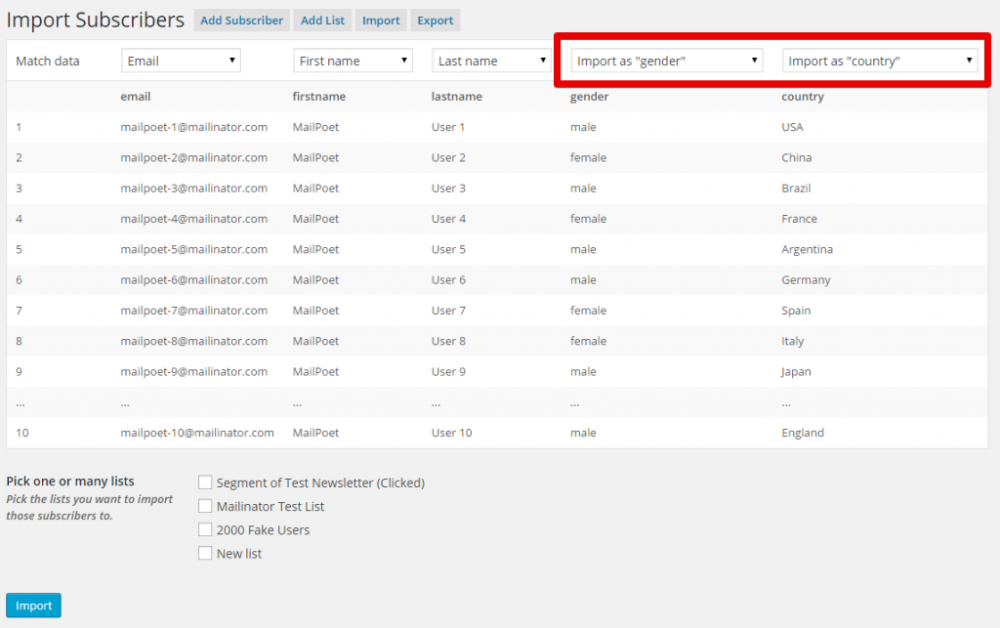 Importing an already existing email address will not duplicate it.

Be aware that your existing subscribers' data will be overwritten.

You might want to included your unsubscribed subscribers the first time you import. This is a good way to prevent you sending to previously unsubscribed folks with MailPoet.

The first subscriber is subscribed, the second is unsubscribed:

Error: “Data is not corresponding”…

A few users have had this error just after importing.

The solution is to change folder permissions to 777 for wp-content/uploads/wysija/import.

If this sounds like nonsense to you, read this article on the WordPress codex. You will need FTP access to your site!